The symbolism of The Road to Reconciliation
This work of art represents a hopeful future due to the recognition on the part of the Roman Catholic church of its history of sexual abuse. A start to reconciliation is made possible by the recognition of things that should never have been allowed to happen. The work is a memorial that makes it clear that the past must not be repeated. The work visualises what connects us, not what separates us.  Read more about the symbolism …

The conception of the artwork
In December 2011 the former Dutch secretary of state for education, Mr Deetman, published his report on sexual abuse within the Roman Catholic church. It estimated the number of victims at between 10,000 and 20,000. A shockwave spread through the media. I was shocked because it seemed as if nothing good was left in the faith. Thus the idea of this artwork was born.  Read more about the conception …

Why was it made?
It is the deepest wish of the artist himself, Pierre Habets from the Netherlands, that the work can make a significant contribution to creating a climate in which reconciliation is possible. The artwork can also play a role in meetings between victims and representatives of the abusers to cross bridges together that apparently could not be crossed, and, as a result reinforce the message of Pope Frances that a repetition of sexual abuse should not occur again. The memorial is meant to be a work that can offer consolation to many.

The photobook
The photobook shows the endresult in bronze as it can be seen at `De Kartuis` a municipal park in Roermond in the south of the Netherlands. When you move the cursor to photobook you can click on the slanted white arrows. The photobook will then fill the screen. By clicking again on the white arrows (top right), or using the esc button on your computer you can close the screen.

Where can the work be seen?
The bronze artwork is on public display at ‘De Kartuis’, a municipal park in Roermond.
Read more about were to see … 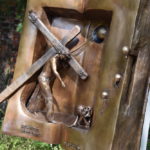 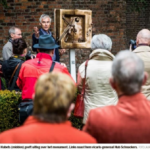 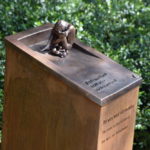 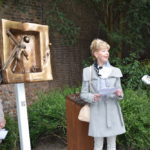